The construction industry had 422,000 job openings in September, according to an Associated Builders and Contractors’ analysis of data from the U.S. Bureau of Labor Statistics’ Job Openings and Labor Turnover Survey. JOLTS defines a job opening as any unfilled position for which an employer is actively recruiting. Industry job openings increased by 36,000 last month and are up 74,000 from a year ago.

Construction workers quit their jobs at a lower rate than they were laid off or discharged for the first time since February 2021.

“Given healthy Construction Backlog Indicator levels and elevated Construction Confidence Index readings, it is not surprising that the number of available, unfilled construction jobs openings increased in September,” said ABC Chief Economist Anirban Basu. “The No. 1 challenge for contractors continues to be securing sufficient numbers of skilled, motivated construction workers.

“Job openings across all industries increased in September, which means that the Federal Reserve won’t pivot away from its hawkish stance on inflation anytime soon,” said Basu. “Rather, interest rates are likely to continue to rise as the Fed battles inflation. Firms focusing on infrastructure projects may continue to remain busy even if the economy ends up in a deep recession next year, due to a combination of current backlog and the expectation of major public infrastructure spending.” 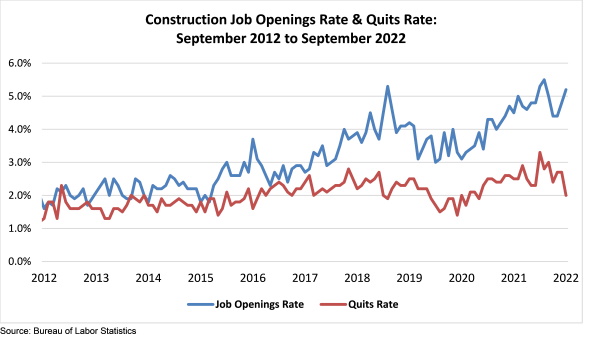