By Jillian StengelJuly 28, 2022No Comments

The U.S. economy contracted at a 0.9% annualized rate in the second quarter of 2022, according to an Associated Builders and Contractors analysis of data released today by the Bureau of Economic Analysis.

Investment in nonresidential structures decreased at an annual rate of 11.7% for the quarter and has now contracted in 10 of the past 11 quarters.

“We have now had two consecutive quarters of economic contraction,” said ABC Chief Economist Anirban Basu. “Even if growth had been moderately positive during the second quarter, it would still be clear that America’s economy suffered a sizeable setback in recovery during the first two quarters of 2022. The debate over whether America is in recession is on and will undoubtedly capture much media attention.

“The forward-looking trajectory of the economy is far more important to contractors,” said Basu. “While it is possible that we have passed the point of peak inflation, nominal growth is also set to slow in the context of weakening consumer spending, pervasive pessimism, rising borrowing costs and a global economy that is aggressively downshifting. This suggests that the already weak performance of nonresidential fixed investment in structures seen today may deteriorate further over the next several quarters. ABC’s Construction Confidence Index, which showed falling contractor confidence last month, supports this notion.” 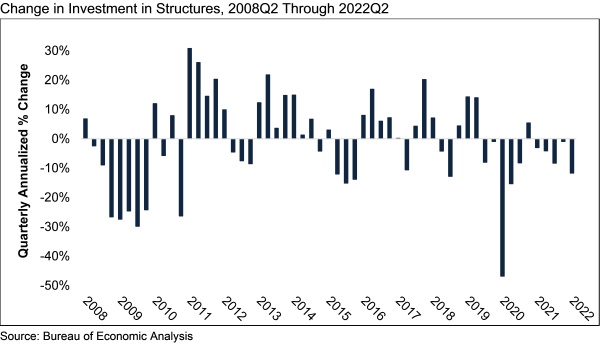