WASHINGTON, July 1—National nonresidential construction spending was down by 0.6% in May, according to an Associated Builders and Contractors analysis of data published today by the U.S. Census Bureau. On a seasonally adjusted annualized basis, nonresidential spending totaled $832.5 billion for the month.

“Many contractors continue to report that they are operating at capacity despite a lack of strong nonresidential construction spending recovery,” said ABC Chief Economist Anirban Basu. “That juxtaposition provides solid evidence that the supply side of the U.S. economy remains heavily constrained by worker shortages, domestic and global supply chain disruptions and resulting high prices.

“Since the early months of the pandemic, contractors have reported that they are able to pass along their cost increases to project owners, according to ABC’s Construction Confidence Index,” said Basu. “But there are growing concerns among industry leaders that the ability to pass along cost increases will dissipate during the months ahead as financial conditions tighten and confidence in economic performance wanes.

“A primary implication is that contractor margins may be squeezed going forward, and there is growing anecdotal evidence that this is already occurring,” said Basu. “There is also a growing risk of a significant number of project postponements in both private and public construction segments due to high materials prices and labor costs.

“The key to sustaining nonresidential construction’s recovery will be slower inflation,” said Basu. “As long as inflation remains elevated, monetary policy will continue to tighten and project owners will be less willing to move forward with projects in an effort to preserve cash. Unfortunately, ongoing efforts to limit inflation are likely to result in recession or at least further economic slowing, which will create additional issues for many contractors. However, less inflation and more favorable construction materials prices would create a foundation for renewed construction spending vigor.” 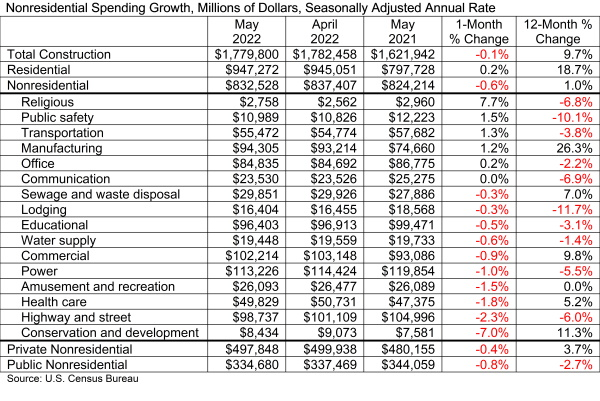 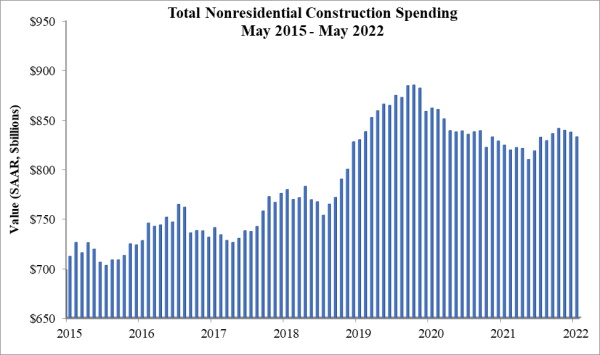