By Jillian StengelMay 5, 2022No Comments 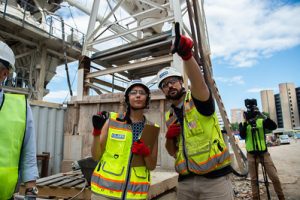 billion to provide more than 1.3 million course attendees with craft, leadership and safety education in 2021, according to ABC’s 2022 Workforce Development Survey. The annual assessment quantifies the scope of ABC members’ workforce development initiatives nationwide to advance their employees’ careers in commercial and industrial construction to build the places where Americans live, work, learn, heal and play.

The ABC-NJ Workforce Development Team promotes careers in skilled craft labor across the state of New Jersey, actively partnering with schools, community and veterans’ organizations, NJDOC and New Jersey One Stop Career Centers to spread the good word of gainful employment in the trades.

Safety education accounted for the greatest share—56%—of total workforce investment. Investment in craft education increased significantly to 34% of the total in 2021, up from 22% in 2020, responding to the need for an estimated 650,000 additional construction workers in 2022. General and construction management contractors boosted their share of the total workforce development investment to 65% in 2021 from 58% in 2020.

“Our goal is to position the skilled craft professions as viable lifelong career paths for recent graduates, veterans, second career seekers, and the returning population,” said Samantha DeAlmeida, ABC-NJ’s President and CEO. “We find and vet new employee candidates for our members to hire and place into our growing apprenticeship program, which offers U.S.DOL approved apprenticeship opportunities in seventeen trade specialties.” 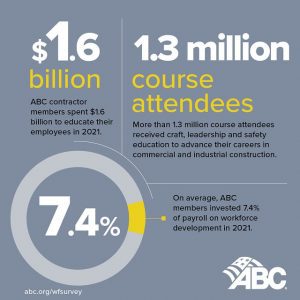 Every $1 billion in extra construction spending generates an average of at least 3,900 new jobs.

Key findings from the survey include:

ABC’s all-of-the-above approach to workforce development has produced a network of ABC chapters and affiliates across the country that offer more than 800 apprenticeship, craft, safety and management education programs—including more than 300 government-registered apprenticeship programs across 20 different occupations—to build the people who build America.

Industry consulting firm FMI conducted the 2022 Workforce Development Survey from Jan. 4 to Feb. 18, 2022. Aggregated data was derived by calculating the average amount spent on education by each respondent and multiplying that by the total number of ABC contractor members.

Associated Builders and Contractors is a national construction industry trade association established in 1950 that represents more than 21,000 members. Founded on the merit shop philosophy, ABC and its 69 chapters help members develop people, win work and deliver that work safely, ethically and profitably for the betterment of the communities in which ABC and its members work. Visit us at abc.org.