By Jillian StengelJanuary 10, 2023No Comments

Associated Builders and Contractors reports today that its Construction Backlog Indicator remained unchanged at 9.2 months in December, according to an ABC member survey conducted Dec. 20, 2022, to Jan. 5, 2023. The reading is one month higher than in December 2021.

Backlog remains at its highest level since the second quarter of 2019. This has been especially true in the South, which has been the case for many of the past several years.

ABC’s Construction Confidence Index reading for profit margins and sales increased in December, while the reading for staffing levels moved lower. All three readings remain above the threshold of 50, indicating expectations of growth over the next six months.

“Contractors enter the new year with plenty of optimism,” said ABC Chief Economist Anirban Basu. “Backlog remains elevated, which means that, even if the economy were to enter recession this year, contractors would likely be insulated from significant harm. Rather than fixate on the possibility of a recession, many contractors remain focused on growth, with expectations for rising sales and staffing levels over the next half year. Even the reading on profit margins increased this month, perhaps reflecting an improved supply chain.

“While 2023 continues to be filled with promise, contractors may soon show more concern,” said Basu. “Anecdotal evidence suggests that financing commercial real estate projects is more difficult, due in part to recession predictions. The general increase in the cost of capital has also jeopardized many projects, with certain contractors noticing an increase in postponements.” 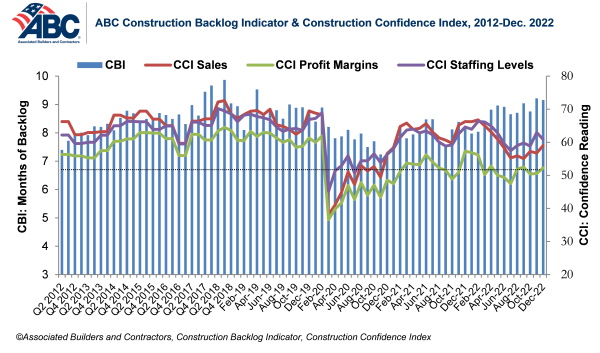 Note: The reference months for the Construction Backlog Indicator and Construction Confidence Index data series were revised on May 12, 2020, to better reflect the survey period. CBI quantifies the previous month’s work under contract based on the latest financials available, while CCI measures contractors’ outlook for the next six months.