ABC: Construction Job Openings Up By 54,000 in August

By Jillian StengelOctober 4, 2022No Comments

The construction industry had 407,000 construction job openings in August, according to an Associated Builders and Contractors analysis of data from the U.S. Bureau of Labor Statistics’ Job Openings and Labor Turnover Survey. JOLTS defines a job opening as any unfilled position for which an employer is actively recruiting. Industry job openings increased by 54,000 last month and are up by 45,000 from the same time last year.

Construction workers quit their jobs at a faster rate than they were laid off or discharged for the 18th consecutive month in August.

“Today’s job openings estimate is further evidence that contractors continue to hunt for talent,” said ABC Chief Economist Anirban Basu. “In August, 5% of all construction jobs were unfilled, higher than at any point between 2001, when the BLS began tracking it, and 2021. Contractors have every intention of expanding their staffing levels over the next several months, according to ABC’s Construction Confidence Index, but severely constrained labor supply will frustrate these efforts.

“Despite the increase in construction industry job openings, the overall number of job openings economywide fell to 10.1 million, its lowest level since June 2021,” said Basu. “This is actually good news for the real estate and construction segments, as any evidence of weakening economic momentum brings us closer to the point when the Federal Reserve can stop ramping up borrowing costs.” 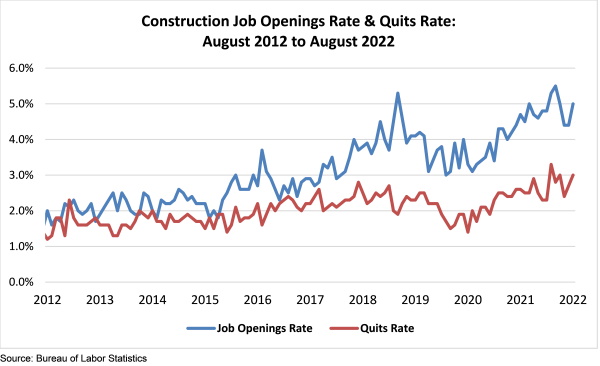 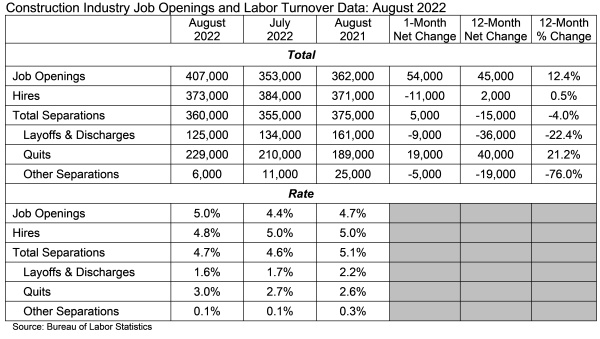